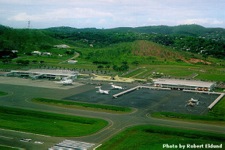 Port Moresby International airport is undergoing an expansion, ahead of an influx of passengers for the 2015 South Pacific Games, the 2018 APEC summit and projected increases in traffic as the economy grows. The Acting Managing Director of the National Airports Corporation, Joseph Tupiri, outlines the plans in the following Q&A from Business Advantage News.

BAPNG: What exactly are the plans to develop the airport at Moresby?

JT: We have a programme and we have a number of projects within the programme to progressively improve capacity at the airport. Currently we are extending the international terminal building. It is a K100 million Design and Construct contract and is already 30% complete and on target to deliver it by next April, in time for the 2015 South Pacific Games. It’s a 30-metre extension to the north west end and 20m to the south-east end, with modifications inside to improve efficiency. We want to give the passengers seamless experience to what they have in Brisbane or Cairns, or Sydney or any Asian airport. We are funding it through an ANZ commercial loan backed by the government. It’s a challenging project because we have to keep the terminal building fully operational with minimum disruption during construction. Key features will include increased counters for processing passengers for both airlines and Customs and Immigration as well as improved retail space for the comfort of passengers.

Port Moresby [Jacksons] International Airport is lagging behind our neighbouring airports of similar size in terms of efficiency and customer experience and we have a lot of catching up to do. We want to give the passengers a seamless experience comparable to what they have in Brisbane, Cairns, Sydney or any Asian airport. It’s important we achieve that level of service. We are aware a great level of service cannot be achieved overnight but we are making a start to achieving that. Currently it takes about 7 to 10 minutes to process a passenger. After the current extension is complete, that will be cut down to down to about 3 minutes, which is IATA Level C service.

BAPNG: Are there plans to develop any other airport land?

The next stage is to connect the international and domestic terminal buildings to increase terminal space to cater for forecast growth to 2030 and in time for the 2018 APEC Summit to be hosted by PNG. When I came into this position six months ago, we looked at that plan, which looked at expected requirements up to 2030, taking into account increased passenger numbers, volumes and aircraft types we could expect in that period. Given the limited timeframe within which we need to deliver the terminal building, option two seems the most feasible. So we have suggested to government that we join the two buildings as the best solution. ‘Over the next 3-4 years we want to put Port Moresby Airport under a public-private partnership arrangement because that’s the way the rest of the airports in the region are going.’ So we are aiming to put up a 35,000 square metre, three-level building connecting the current international and domestic terminal buildings. Ground level will be for arrival and level two will be for departures. We aim to deliver that in late 2017, in time for the 2018 APEC summit. Rather ambitious, but our advisers say with modern architectural design and construction methods, we can deliver it by then. We are in the process of contracting an independent Strategic Advisor who will actually look at the long term development and operating model for Port Moresby Airport under a potential Private Public Partnership (PPP). At the same time the Strategic Advisor will quickly structure the transaction and manage the procurement of the financing and delivery of the terminal infill project.

BAPNG: Has a design been finalised and a contract been let?

JT: Over the next three-to-four years we want to put Port Moresby Airport under a public-private partnership arrangement because that’s the way the rest of the airports in the region are going. That way we can access private sector capital and skills to ensure the airport is operated at the highest level of service to support the competitiveness of the PNG economy. But because we are pressed for time I don’t want to deliver that without ensuring the marketability of the airport in the long-term. ‘The existing airport was built to process about 300-400,000 passengers per year. We are now processing about 1.5 million.’ So, we are going to engage an internationally reputable Strategic Adviser with sell-side experience to carryout market sounding for reputable companies and consortiums that would finance, develop and operate airports under PPP models in the region for the long-term for Port Moresby while at the same time procuring the financing, design and development of the terminal infill. We have 15 such Expressions of Interest as we are sitting here talking and we will ask for detailed proposals from the top three and by the end of May we will have decided on a Strategic Adviser.

BAPNG: So that means a lot more people to be coming through Port Moresby Airport?

JT: Absolutely. The existing airport was built to process about 300,000 to 400,000 passengers per year. We are now processing about 1.5 million. When you look at the this growth and the country’s projected GDP growth, a growing middle-class, freight and tourism, we think there will be significant growth and demand on the capital’s airport. So while we are working on the PPP for Port Moresby, we are also working on a new cost model for the upkeep and sustainability of the other 21 airports. We also think there will be a demand to create Port Moresby as a hub. We’ve done an assessment, talked to people in the region and we think there’s the potential for efficiencies which regional airlines will recognise, if we build a suitable airport.

JT: You’ve hit the nail on the head. That’s exactly what we are talking about and you know, flying from Hong Kong to Sydney takes a lot longer going via Singapore because of the congestions at those airports than what it would going via Moresby. We have also done some quick calculations about the benefits for New Zealand, Japan and south-east Asian airlines. It’s pretty exciting.

BAPNG: How does improving regional airports in PNG fit in with the plans to develop Port Moresby airport?

JT: Not necessarily. NAC would continue to own the airports. If there is an appetite in the market by airport investors, we will have to have that model for Port Moresby in the next three years. With regards the other airports, for example, Mt Hagen, makes about K1 million in revenue and it costs about K1.5 million to operate. What we are doing is working with the National and Provincial Governments and airport users in the provinces to have a sustainable funding model so everyone can chip in to finance those operations. We have a plan for an airport city development. We are planning to go out and get Expressions of Interest from potential investors who might be interested in building hotels, offices, Direct Factory Outlets. If the provincial governments don’t want to get involved, then we will need central government to provide through a Community Service Obligation (CSO). What we need is a sustainable funding model for the regional airports.

BAPNG: You own a lot of land at Port Moresby airport. Are you planning to sell or lease any of that land?

JT: At the moment, the aerodrome is occupied by NAC by a Certificate of Authorised Occupancy under the Aerodrome Concessions Act and that does not permit the sale of aerodrome land. But we can issue long-term leases. We have a plan for an airport city development. We are planning to go out and get Expressions of Interest from potential investors who might be interested in building hotels, offices, direct factory outlets. As you know, the Kookaburra flyover will be completed by April/May next year and that is going to open up a lot of opportunities for activities at the airport. It will be only a five-minute drive from the government offices in Waigani to us, so there is the potential to develop the precinct here. It’s very exciting, stimulating, but hard work, I tell you.