Lae a Good Place to Invest

Lae has grown to be the major commercial center of Papua New Guinea. The commissioning of the new tidal basin Port in January 2015 was of major importance economically to Lae. The existing Lae Port was unable to handle the increased shipping due to more and more imports and exports. The additional 250 metre of wharfage to the existing 600 meters at the old port means that there will be less shipping congestion.

This Asian Development Bank funded Lae Tidal Basin project, dredged out a swampy tidal basin area to the West of the existing wharf and filled in further swampy land which is planned to be used for an industrial estate particularly for Port related businesses. 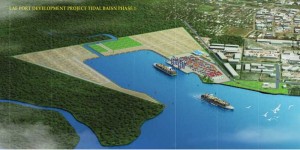 The Harmony Gold Ltd Morobe Mining Gold Mine at Hidden Valley in the Wau-Bulolo District of Morobe Province is beginning to show a good profit and provides a boost to the economy of Lae and Morobe Province and the Private Sector of course continues to benefit from spin-offs from this mine.

Newcrest and Harmony JV are now moving toward a full feasibility stage on the massive Wafi-Golpu mining development in the Mumeng area of the Wau-Bulolo District, which could be destined to become a world class Gold and Copper Mine. The development of this mine will further stimulate businesses in Lae.

Tourism continues to show enormous potential but is hindered by lack or resources and facilities in the Province as well as the relatively high cost of Travel and Accommodation.

Business benefits from the reasonably good infrastructure in Lae, where there is now a more regular power supply from the Ramu Hydro scheme, and smaller backup generators. The Mayur Resources coal fired generator and the Biomass generator in the Markham Valley will add a further 50 plus megawatts of power into the Ramu power grid.

Plans for future construction of a Ramu 2 Power hydro power station at Yonki and a second transmission line from Yonki, will guarantee a quality power supply for the future. Lae has a good quality water supply and good communications. The completion of the Lae Road reconstruction program and the new highway to Nadzab will mean that all infrastructure will be in place to suit industry needs for the present and the future.

Why is Lae a good place to invest relative to other centers in Papua New Guinea? Current indicators show that business is doing relatively well throughout Papua New Guinea but more particularly in Lae, much of this is due to the following reasons:

Cocoa a crop more associated to the island Provinces, has seen Morobe Province benefit from concentrated planting activities over the last 10 years, which has boosted the cocoa output. Whilst most cocoa produced is exported some is processed in PNG from the Watut cocoa factory.

The Morobe Province continues to benefit from the nearby mining developments at Hidden Valley, Kainantu, Wafi-Golpu and Ramu Nickel.

The Government has involved itself in a process to remove impediments to conducting business.  Whilst there has been some success, there is still a long way to go. In general however the Private Sector is happy with the fact that the Government has continued to show an interest in this process.

All the above indicates that business in PNG and particularly Lae is very healthy indeed.

The Lae Chamber of Commerce works closely with the Provincial and City authorities concerning the infrastructure deficiency issues. Current problems with the City Authority are being addressed by the National Government and the LCCI is providing considerable advice from the private sector perspective. We are ever hopeful that permanent solutions will be found to the perennial infrastructure problems.