From the President’s Desk – 31st October

As advised last week the LCCI will again put on a Christmas function this year.

This function will be run conjointly with our member “International SOS Limited”, who will be bringing their Health Directors, to make a presentation of their operation as well as discussing the value of pre-employment and annual health checks, vaccination programs, health risk assessments, health promotion, first aid training and medical emergency response plans.

This joint function will be on 11th November at the Lae International Hotel Conference centre and poolside. The SOS presentation will commence at 5 PM and run for an hour, after which all guests will join the Lae Chamber of Commerce, in celebrating the Christmas and New Year festive Centre.

Whilst most of you I am sure will be looking forward to seeing just what International SOS can do for you, there will be some that will not be able to come due to work commitments or otherwise. You will note that the SOS invitation has a “click here” which will automatically accept your attendance but if you find you only can come to the LCCI function after the SOS presentation, please ring through to JENNA on 472 2340 or by email on Admin@lcci.org.pg and reserve your spot.

Lae Chambers of Commerce Councillors are very active in the PNG Games. Long term Councillor and former President Phil Franklin has taken on the responsibility of being Chairman of the Host Organising Committee for the games, and has devoted much of his own time to ensure the games are a success. Phil has done a lot work to raise the profile of the games with the Private Sector, not only in Lae but throughout Papua New Guinea, and the support he has received has been wonderful as well as very generous.

An item on page 57 of Wednesdays Post Courier shows Phil with the Lae Chambers former Vice President and current Councillor Peter Diezmann, who as General Manager of Puma Energy PNG, announces a support package by Puma for the games. Witnessing the event is PNG’s favourite athlete and weightlifter Dika Toua – Click here for the article.

Yesterday the Lae Community Safety Network Committee held a meeting in the Trukai Board Room. The network has been established for about a year after various Private Sector members decided to look at ways to enhance security and safety measures in Lae City. The meetings of this network are always attended by senior RPNGC Officers and members of the AFP.

Security during the forthcoming PNG Games was raised and the Metropolitan Police Commander Iven Lakatani said that the Police are taking every measure they can to make sure the games are as safe and peaceful as possible. Mr Lakatani said that 442 Police would be on duty during the games, and there will be Portable Command units strategically located in the City, particularly around and near the games Stadiums.

All roads will remain open during the games, even those near and around the Stadiums where most of the sporting activities will take place.

Mr Lakatani said that the Police have introduced regular Patrols on the Highway between Lae and Nadzab. This was made possible after the Metropolitan Police Commander and the Provincial Police Commander got together to combine their resources to make this patrol work. Up till now this has not been possible as the Metropolitan command ended at 9 mile (Wau Junction) and the Provincial Command was responsible for the road from this point to Nadzab and beyond.

This Patrol was deemed essential due to the rise in crime caused by the deterioration of the existing Highway and the new works taking place on the New 4 Lane Highway.

Prime Minister O’Neill was in Lae on Wednesday this week to officially open the new wharf extension at the Lae Port, as organised by PNG Ports. This extension will add a further 120 metres of wharfage to the existing Lae Port, so as to better handle the ever increasing number of ships berthing at Lae.

During the opening I took the opportunity of discussing with the Prime Minister some of what I consider to be urgent matters for Lae:

During the week we reported on disruptions to travelling on the Highway. First the family and fellow villagers of the teacher from Barola that was killed some weeks ago, blocked the Highway between Goroka and Barola when they brought the deceased body from the Goroka morgue on Wednesday.

Then yesterday we reported there had been several landslides on the Daulo pass. I haven’t got an update on clearing these landslides but will pass information on to members when it comes to hand. I have received some recent photographs of the landslides, of which the following shows just what the opening of the highway to traffic is up against. 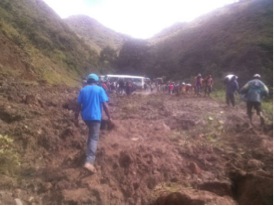